How disconnected are we “civilized” Westerners from our spiritual self? Is there really such a thing as the spiritual world or a realm of the spirits? How effective are our conventional methods of treating mental disorders? Are they really disorders or illnesses, i.e. states and symptoms we need to get rid of?

The article What a Shaman Sees in A Mental Hospital
http://earthweareone.com/what-a-shaman-sees-in-a-mental-hospital/
several excerpts of which I quoted below, sheds a different light on mental health.

Thank you, Ben Naga  http://bennaga.wordpress.com/, for sharing this very interesting article (and website) with me.

In the shamanic view, mental illness signals “the birth of a healer”, explains Malidoma Patrice Somé. Thus, mental disorders are spiritual emergencies, spiritual crises, and need to be regarded as such to aid the healer in being born.

Mental disorders, behavioral disorders of all kinds, signal the fact that two obviously incompatible energies have merged into the same field,” says Dr. Somé.  These disturbances result when the person does not get assistance in dealing with the presence of the energy from the spirit realm.

… we in the West are not trained in how to deal or even taught to acknowledge the existence of psychic phenomena, the spiritual world.  In fact, psychic abilities are denigrated.  When energies from the spiritual world emerge in a Western psyche, that individual is completely unequipped to integrate them or even recognize what is happening.  The result can be terrifying.  Without the proper context for and assistance in dealing with the breakthrough from another level of reality, for all practical purposes, the person is insane.  Heavy dosing with anti-psychotic drugs compounds the problem and prevents the integration that could lead to soul development and growth in the individual who has received these energies.

Alex:  Crazy in the USA, Healer in Africa

To test his belief that the shamanic view of mental illness holds true in the Western world as well as in indigenous cultures, Dr. Somé took a mental patient back to Africa with him, to his village.  “I was prompted by my own curiosity to find out whether there’s truth in the universality that mental illness could be connected with an alignment with a being from another world,” says Dr. Somé.

Alex was an 18-year-old American who had suffered a psychotic break when he was 14.  He had hallucinations, was suicidal, and went through cycles of dangerously severe depression.  He was in a mental hospital and had been given a lot of drugs, but nothing was helping.  “The parents had done everything–unsuccessfully,” says Dr. Somé.  “They didn’t know what else to do.”

With their permission, Dr. Somé took their son to Africa.  “After eight months there, Alex had become quite normal… 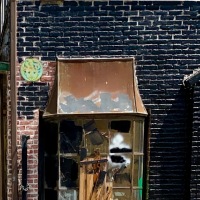