A good book is an island of repose, a refuge, another world to escape to.

This is the captivating read that is presently distracting my gnawing nocturnal thoughts: The Signature of All Things, by Elizabeth Gilbert. 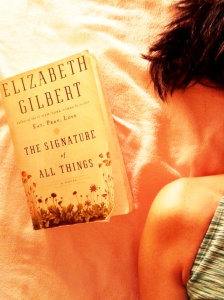 And here an excerpt:

While Beatrix spoke, Alma stared. How could anything be as pretty and disturbing as Prudence’s face? If beauty were truly accuracy’s distraction, as her mother had always said, what did that make Prudence? Quite possibly the least accurate and most distracting object in the known world! Alma’s sense of disquiet multiplied by the moment. She was beginning to realize something dreadful about herself, something that she had never before been given reason to contemplate: she herself was not a pretty thing. It was only by awful comparison that she suddenly came to perceive this. Where Prudence was dainty, Alma was large. Where Prudence had hair spun from golden-white silk, Alma’s hair was the color and texture of rust – and it grew, most unflatteringly, in every direction except downward. Prudence’s nose was a little blossom; Alma’s was a growing yam. On it went, from head to toe: a most miserable accounting.

After breakfast was completed, Beatrix said, “Now come, girls, and embrace each other as sisters.” Alma did embrace Prudence obediently, but without warmth. Side by side, the contrast was even more notable. More than anything, it felt to Alma, the two of them resembled a perfect little robin’s egg and a big homely pine cone, suddenly and inexplicably sharing the same nest.

The realization of all this made Alma want to weep, or fight. She could feel her face settling into a dark sulk. Her mother must have seen it, for she said, “Prudence, please excuse us while I speak to your sister for a moment.” Beatrix took Alma by the upper arm, pinching her so firmly that it burned, and escorted her into the hall. Alma felt tears coming, but forced her tears to halt, and then to halt again, and then to halt once more.

Beatrix looked down at her one natural-born child, and spoke in a voice of cool granite: “I do not intend ever again to see such a face upon my daughter as the face I have just seen. Do you understand me?”

Alma managed to say only one wavering word (“But – “) before she was cut off.

“No outbreak of jealousy or malice has ever been welcomed in God’s eyes.” Beatrix continued, “nor shall such an outbreak ever be welcomed in the eyes of your family. If you have sentiments within you that are unpleasant or uncharitable, let them fall stillborn to the ground. Become the master of yourself, Alma Whittaker. Am I understood?”